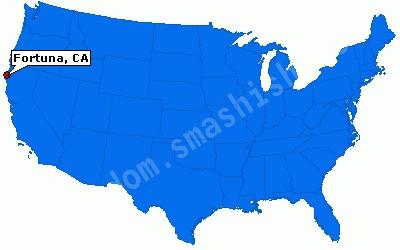 Yes, "Sunny Fortuna", a small town in northern California's Humboldt County, would like to be known as "the friendly city." Unfortunately, the town is (apparently) full of racists and hate-mongers who actually experience confusion over their physical location while standing in front of the local Chinese restaurant. "Wait I don't understand, the sign says Hunan Villiage, but I thought this was America!"

This is not a joke. Some residents in Fortuna sincerely feel threatened by a Chinese restaurant in their town. Read on for more absurdity from The White-Friendly City.

Fortuna -- Garrett Albright, President of the Fortuna Citizens Council, demanded Thursday that Hunan Village, a Chinese restaurant, change its name to something more appropriate. "This is Fortuna, in the United States of America, a nation which is, at least presently, entirely separate from China," said Albright, in a prepared statement. "A business implying that this little berg is, in fact, Hunan China, is therefore going to raise the eyebrows of those who had been perfectly content to live in Fortuna up until that point."* The organization was inspired by the brazen attempt earlier this year of Carlos Torres to open his new business under the name Mex City Auto Detailing. *transcript courtesy of the North Coast Journal posted by Carson Park Ranger @ 10:45 PM

Born under a bad sign: Mex City Auto Detailing hoped to open at 1409 Main in Fortuna, but will relocate to Eureka.

Fortuna doesn't always live up to its nickname, "The Friendly City."

In part, that's because of the way some Fortunans seem to be reacting to demographic upheaval in the area, as the local Latino population balloons. And though many are happy about the city's changing dynamic, some find it difficult to accept the transformation.

One recent incident, concerning a new local business that came and disappeared, brings issues of homegrown prejudice into high relief. In late June, at an unassuming building located at 1409 Main St. -- directly across the street from the Fortuna Chamber of Commerce -- a sign for "Mex City Auto Detailing" went up. Then, in a few days, it came down. Shortly thereafter, a "For Rent" sign reappeared in the window.

A web of stories about the business, none of which seem to point to a single version of the events, likewise calls attention to the fact that in close-knit communities, problems are often swept under the rug rather than dealt with directly.

Around February of this year, Ray Ambrosini of Fortuna's Ray's Used Cars and partner Carlos Torres, an auto detailer who also runs a gardening business in the area, had agreed to rent 1409 Main St. from Gary Brownell, who manages the property for his wife, Elizabeth Brownell. Ambrosini had planned to show some of his cars in the parking lot of the detailing shop.

He and Torres spent months "in limbo," Ambrosini said. That's because it took much longer than expected to remodel the building. But that wasn't the only stumbling block facing Torres and Ambrosini. When the business' sign finally went up, some members of the community reacted in an unsettling way.

"We had complaints from people walking by," said Elizabeth Brownell last week. According to her, passersby stopped at the building while they were there remodeling and asked them, "What's this 'Mex City'?" They expressed concern about how a business with a name like that would adversely affect the neighborhood, she said, adding that Gary Brownell relayed the message to Torres. "My husband let him know that people were complaining," she said.

Torres decided to pull out of the rental agreement. And according to Elizabeth Brownell, he didn't give her husband a reason for leaving. But Gary Brownell said the reason was simple: "Carlos couldn't pay the rent," he explained last week.

Ray Ambrosini doesn't buy that explanation. He said Torres had the money to rent the building. "People were dissatisfied with the name," he said. But more importantly, "the owner was concerned for the property."

Fortuna city planner Stephen Avis interacted with both Gary Brownell and Carlos Torres. When the rental deal went sour, the two men visited Avis's office to explain what had transpired. "The property owner received phone calls and visits from neighboring business owners who were concerned about what might happen there," Avis said last week. "And he [Brownell] requested that the name of the business be changed with the prospective tenant [Torres] and the tenant said no, and if he [Brownell] didn't want to rent to him, he [Torres] would cancel the lease agreement."

Reached late last week, Torres declined to speak about the incident in detail. He only insisted that he abandoned the business because he couldn't pay the rent. "There was no racism involved," he said. However, Torres said that he plans to launch his detailing shop in Eureka.

According to Jose Quezada, program coordinator for Humboldt County's Workforce Investment Board, there is a palpable "don't rock the boat" mentality among the county's Latino population.

All it takes is a brief glance at the Demographic and Economic Conditions section of Fortuna's new draft general plan to understand that the city's future, in large part, is its Latino community. Already, 10.5 percent of the city's total population is Latino, and at the elementary school level, the number of children who speak Spanish as a first language has risen to 26.3 percent (that's a 431 percent increase between 1993-94 and 2004-05.) The city's Latino community is one of the fastest growing ones in the entire state, according to Avis.

At the same time, it's hard to judge the exact scope of the Latino community's growth as well as its specific needs because, according to Avis, "hey keep a very low profile collectively, as a group."

As for the latent prejudice allegedly exhibited by some Fortunans about Torres' sign, Quezada said: "It doesn't surprise me that that sentiment is there."

And he should know. When Quezada was a resident of Fortuna back in the early '90s and served on the school board there, he recalls how some members of the city government treated him unprofessionally because of his ethnicity. "It was a trip," he said, not wanting to get into details.

David Reed, coordinator for the Fortuna Business Improvement District, thinks things have improved. He was quick to point out the large Latino contingent of Fortuna's business community. Investor's Trust, a local mortgage lender, has opened up a Spanish-speaking office geared specifically to the Latino community.

As for the "Mex City" incident, Avis described it as an "anomaly." Though he did mention that in the past he'd heard "disparaging remarks about the storefronts of other Mexican stores in Fortuna, about the loud colors and the dark windows."

What if anything is Fortuna doing about the portion of its population that harbors prejudice toward Latinos? Not much. In the Community Survey Report of the General Plan, which purports to "convey the community's values and future expectations," no mention is made of "prejudice" or "discrimination" -- as for whether or not it's a problem, that question wasn't even posed to the city's Latino residents. That's most likely because the city government doesn't consider issues like that to be under its purview. "From our perspective, that is a private property issue," said Fortuna City Manager Duanne Rigge when asked about Torres' and Brownell's failed rental agreement.

Stephen Avis pointed out that in the Natural and Cultural Resources section of the General Plan, there is a small section stipulating that "the City shall recognize and embrace the diversity of cultures in the community and encourage the expansion of public festivals celebrating specific cultural identity."

Nonetheless, as the Latino population grows, latent tensions in the community grow as well. In a recent My Word column by Jim Garvey published in the Times-Standard, he said, "the very fabric of our life is being challenged by customs and a language that is totally foreign to us." He went on to describe the inflow of illegal immigrants into the county as an "insane invasion."

His opinions are not atypical in America today. According to a Spring 2007 report from the Southern Poverty Law Center, there has been a 40 percent jump in hate groups since 2000. "Much of the expansion," the report says, "has been driven by hate groups' exploitation of the issue of illegal immigration, which many Americans see as a pressing concern." And in the past two years alone, some 250 new nativist groups have cropped up, some armed and involved in vigilante round-ups of unauthorized Latino immigrants.

That's why Stephen Avis was so impressed to hear that Carlos Torres wasn't crying foul. "It would be so easy to firebrand the problem," Avis said. "If in fact he felt he was being discriminated against ... in this day and age that would be an easy target for someone to make a case about. If he's not doing that, it's the sign of a good business person."

But Ray Ambrosini gleaned a different lesson from the whole experience, which he described as disappointing. He said, "I'll bet some people who complained about the sign ...  if they had to clean their yard, they'd call a Mexican."

This domain and web site may be for sale!